Minister Kevin O’Brien of the Gov. of NL Dept. of Advanced Education and Skills (AES) recently announced their generous support for WISE NL and its award winning Student Summe

r Employment Program (SSEP), with a funding of $45,000 through its SAY (Service Agreement for Youth) grant for 2014. Over the past 25 years, we have had over 800 SSEP graduates who have gone on to successful careers in various sciences, engineering, mathematics and other pathways.  The AES-SAY support will allow us to again manage this program that grew in 2013 to over 50 young women from all areas of the province, including job placements in St. John’s, Labrador, Corner Brook and Norris Point.  Again this year, we have received additional support for the student job placements through Service Canada, Hibernia, Suncor, Husky and Memorial University.  This grant from AES will once again allow us to mentor another fresh group of young Level 2 females into promising careers. As the father of three daughters and being the MHA for the District of Gander, Min. O’Brien appreciates the unique opportunity that SSEP provides to these young students.

The Honorable Charlene Johnson, Minister of Finance, spoke at our WISE NL 25th Year Celebration and Conference that we hosted in October 2013.  As a SSEP graduate and an Honorary WISE NL member, she has continued to express support for our program, as it had a major influence on her education and care 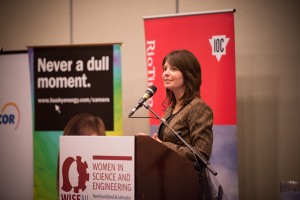 er choices. She was a SSEP participant in 1992, and went on to complete Bachelor and Masters studies in Forest Engineering and Environmental Engineering, followed by a political career that began as an MHA in 2003, becoming the youngest female ever elected to the NL House of Assembly.  In 2007, she was appointed Min. of Environment and Conservation, encompassing both her environmental science and government roles.  In 2009, she broke new ground, becoming the first MHA to give birth while in office, setting precedent for maternity leave for legislature. In 2011, she became the Min. of Child, Youth and Family Services, as well as the Min. Responsible for the Status of Women. In 2013, she was appointed multiple ministerial roles with Innovation, Business and Rural Development (IBRD), the Office of Public Engagement, and the Research and Development Corporation. Now in March 2014, she presented her first provincial budget as the Min. of Finance, sporting the traditional new shoes and joined by her young daughter and family.  WISE NL takes pleasure in her milestones and accomplishments, and hope that other young SSEP participants will experience similar academic and confidence building mentorship.